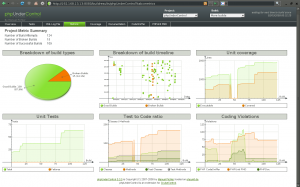 Did you know that you can automate unit tests (which is the PHP worlds equalient of compilation checks 🙂 ).

Set up your development team using local checkouts of the project and have them do local PHPUnit tests, check their changes in and then get Continuous Integration checks done on a central server using phpUnderControl that emails the team with success/fail reports, it’s a good way to work.

phpUnderControl is an addon application for the continuous integration tool CruiseControl, which integrates some of the best PHP development tools. This project aims to make your first steps with CruiseControl and PHP as easy as possible. Therefore phpUnderControl comes with a command line tool that performs all modifications to an existing CruiseControl installation.

Go and check it out today 🙂

This site uses Akismet to reduce spam. Learn how your comment data is processed.